Understanding artery stenosis is the first step in taking control of your diagnosis. We’re pleased to offer comprehensive, innovative care and the support you need to get you back to what matters most — your family, friends and favorite activities. There’s no award or accolade more meaningful than being able to restore you to whole health.

The AdventHealth Neuroscience Institute is a state-of-the-art center for adults and children affected by carotid and vertebral artery stenosis. We specialize in minimally invasive treatments, including interventional neuroradiology (INR), a new procedure available at just a few medical centers in the country. 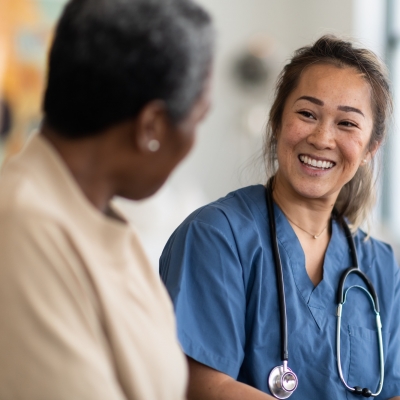 Expert Neurovascular Care You Can Count On

When you’re ready to feel better, we’re here to help. Contact us to learn more about your treatment options for a carotid, vertebral and intracranial artery stenosis. We diagnose and treat common and complex neurovascular disorders with uncommon compassion for you and the people you love.

What Is Artery Stenosis?

An artery is a blood vessel that carries nutrient- and oxygen-rich blood from the heart to other parts of the body. If an artery becomes clogged, it can grow too narrow to carry enough blood to the rest of the body. This narrowing is called stenosis.

The carotid arteries are two of the most important blood vessels in the body. They are located on the right and left sides of the neck. These arteries carry blood to the neck, face and certain parts of the brain, like the center and the surface of the brain.

If you have a carotid artery blockage, you’re at high risk of a stroke. A stroke occurs when blood can’t flow to the brain and so brain cells begin to die.

Vertebral artery stenosis (also called vertebrobasilar insufficiency) happens when the vertebral and basilar arteries at the base of the brain become blocked. These arteries supply blood to the brainstem and the cerebellum.

Like carotid artery stenosis, vertebral artery stenosis is highly dangerous and can prevent oxygen from reaching the brain. When the brain doesn’t get enough oxygen, a stroke, or even death, can occur.

When a stroke is triggered by artery stenosis, the direct cause is usually:

A variety of risk factors can lead to atherosclerosis and the development of stenosis in the arteries.

While some plaque buildup in the arteries likely begins around the age of 30, people between the ages of 40 and 50 are especially prone to atherosclerosis. Family history can also play a role.

However, the most common precursors to artery stenosis are lifestyle risk factors like:

Unfortunately, it often takes a medical emergency to alert you to the presence of a carotid artery blockage or other types of artery stenosis. Atherosclerosis can develop silently over the years. That’s why it’s so important to control your lifestyle risk factors by exercising regularly, eating a healthy diet and avoiding tobacco.

A transient ischemic attack (TIA) is one of the most common ways that severe atherosclerosis is discovered. A TIA, often called a mini-stroke, occurs when there is a temporary shortage of blood to the brain.

Signs of a TIA are similar to stroke symptoms, but usually last for a short time. Signs include:

During a stroke, the brain doesn’t get enough blood and oxygen. Brain cells begin to die within seconds.

Identifying the signs of a stroke and knowing when to seek immediate medical attention could save your life or someone else’s. Signs include:

If your doctor determines that you’re at risk for carotid, vertebral or intracranial stenosis, several tests can detect artery blockage.

An ultrasound can help your doctor evaluate blood flow through the body and identify areas where there is increased pressure in the arteries.

An MRI, CT Scan or Ultrasound

These types of imaging procedures can help your doctor determine if you’ve already had any strokes. Some people have multiple TIAs without realizing they’ve experienced strokes. The scans help identify areas of damaged brain tissue.

Angiography is a way to map the flow of blood in the body using X-rays. Contrast dye is injected into the body, allowing the scan to reveal areas of blocked blood flow or damaged vessels. This is one of the most common ways to check for evidence of stroke, TIA, blood clots and artery stenosis.

When you have a blocked artery in the brain, treatment might start with lifestyle modifications and medication that can help thin the blood and increase circulation to the brain.

However, if you have severe atherosclerosis or you’ve already experienced a TIA or stroke, your doctor will likely recommend more targeted treatments. These may include:

Angioplasty, a minimally invasive surgery, uses a small balloon to widen a blocked artery and a stent to keep the artery open.

This minimally invasive procedure uses X-ray guidance and a tiny catheter to access and unblock the affected artery.